The tropical wet forests west of the Andes in the Ecuadorian coastal area form the second largest natural region in Ecuador. This particularly species-rich area is one of the most degraded habitats in Ecuador. Three quarters of the original forest has already been destroyed.

At the beginning of the 19th century, the lowlands along Ecuador’s coast were only sparsely populated. In the 1930s, its settlement and cattle ranching were strongly encouraged by the government. Land was given to those who came and claimed it. A significant portion was converted to pasture, on which the invasive African grass Saboya (Panicum Maximum) now grows mostly.

These forests, which once covered large parts of the coastal region and harbored an enormous biodiversity, are now mostly a scattered chain of remaining forest islands. In many areas, these are secondary forests, which are nevertheless of enormous importance for the climate and biodiversity. The threat to the remaining forests is unbroken, which is why their protection in combination with reforestation projects is central.

Arbofino, with the support of companies and private individuals, aims to create new nature reserves with a unique, holistic approach.

Where there was once forest, new forest is to be created again. The effort for this is substantial, because without intensive care in the initial phase, the mortality of the young trees is very high. We rely on professionalism and passion.

The pressure on the remaining forests is unabatedly high. The first thing to do is to protect these forests, which are particularly valuable for biodiversity and for the climate. The lovely animal sightings in our nature reserves drive us on.

Our goals – measurable and verifiable at any time 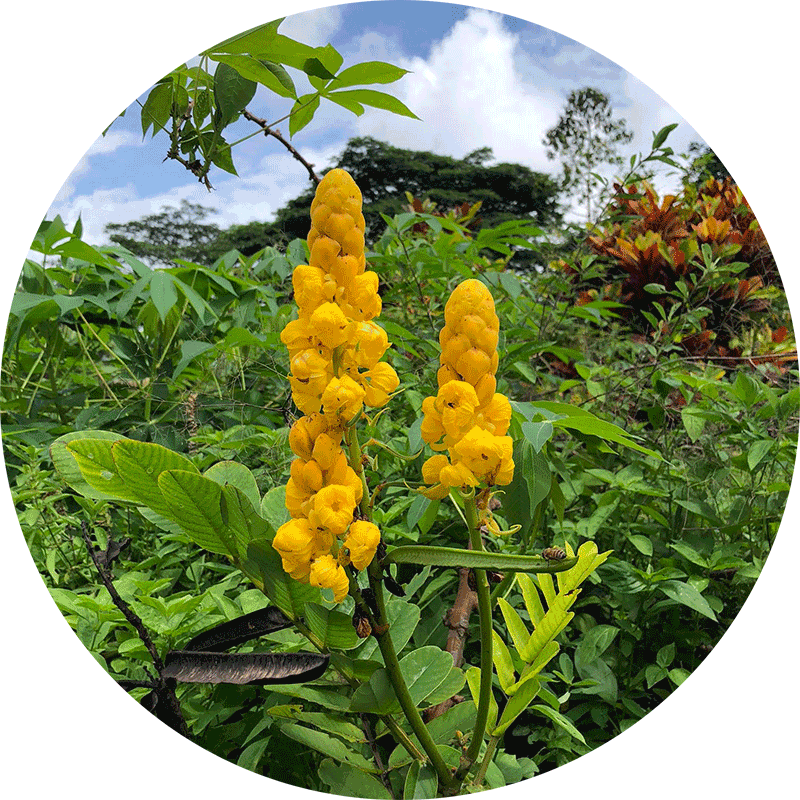 Our holistic approach – it should be particularly impactful!

In all our projects, we want to achieve a positive impact on different levels. In doing so, we want to ensure that the conservation projects are secured for the long term, that a continuous improvement process takes place and that social issues are specifically included:

Through various monitoring activities and measurements, in collaboration with universities and scientists, the different impacts are analyzed over a long period of time. Our goal is to create a forest that is as valuable as possible for nature.

These new nature reserves are not subject to commercial use. The land belongs to our non-profit Bosquefino Foundation and is protected from poachers and deforestation by local guards.

Arbofino reforestation concept at a glance… 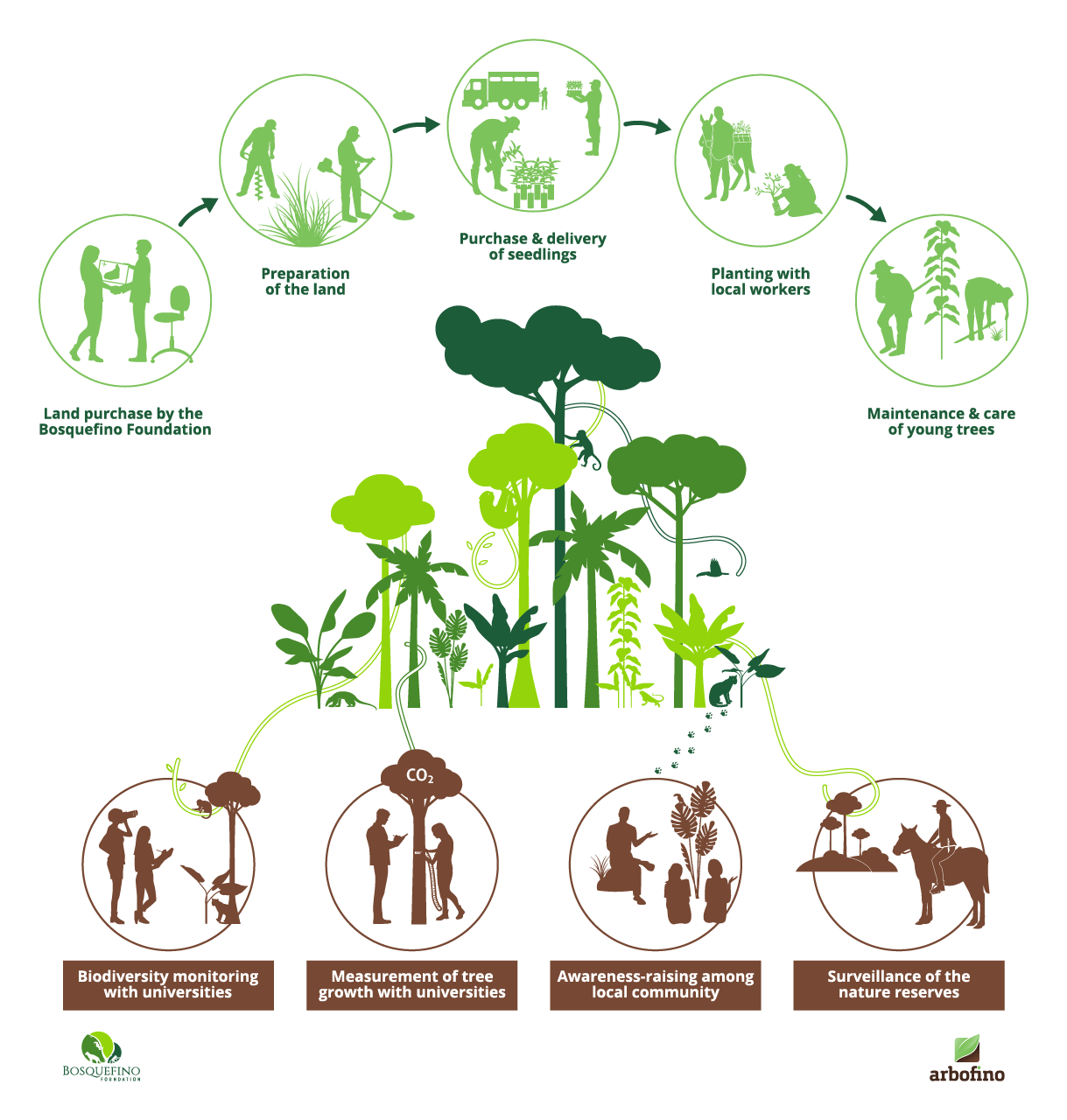 (If you simply want to support our natural reforestation or social projects in the form of a donation, you are welcome to do so through our non-profit Bosquefino Association: www.bosquefino.org)

Planting trees in our Bosquefino nature reserves means a particularly effective commitment in favor of the climate, biodiversity and local community. Appropriately, we offer a tree adoption for a period of five years. For yourself to compensate for a trip or a purchase or as a meaningful gift for festive occasions of loved ones, such as birthday, baptism, wedding, Christmas or anniversaries. 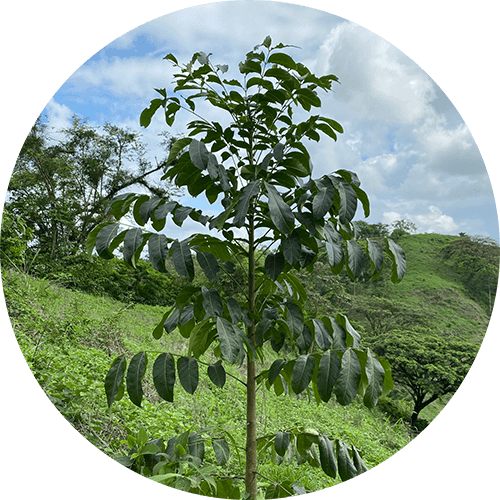 Be aware, with us it is much more than simply “planting trees”!
Each tree adoption includes:

Land purchase through our Bosquefino Foundation

You can buy the tree adoption directly in our forest shop and choose between 5, 10, 20, 30, 40 or 50 trees. In case you would like to make such a present to several people, or if you would like to give even more trees to one person, please contact us. 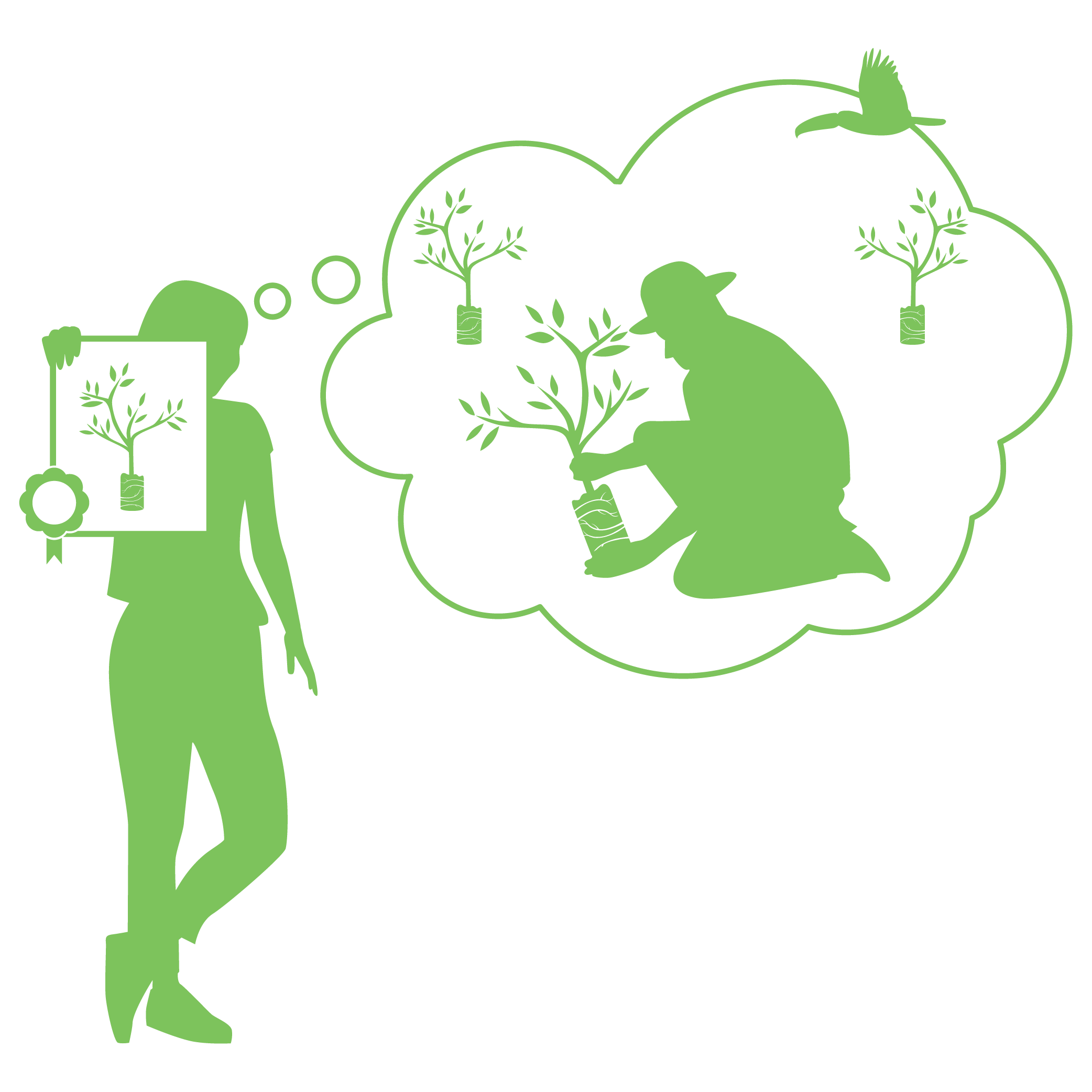 For each tree adoption you will receive:

Personalized certificate with the number of trees, total area and compensated amount of CO2

Map with the marked reforestation plot

For the climate and biodiversity it is of utmost importance that existing forests and forest fragments are preserved. With a forest adoption you make it possible that these highly endangered retreats for numerous animal species are saved from deforestation and continue to serve as a valuable carbon sink. With a forest adoption over five years, we can acquire the land through the Bosquefino Foundation and protect the forest areas in the long term.

A wonderful commitment for yourself to offset a trip or purchase, or as a meaningful gift for festive occasions of loved ones, such as birthdays, baptisms, weddings, Christmas or anniversaries. 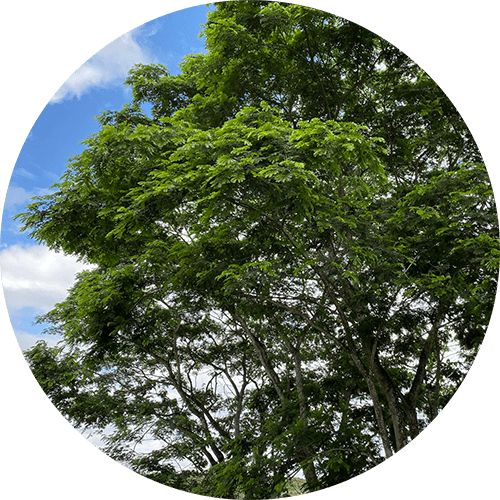 Be aware, with us it means much more than simply “protecting forest”!
Each forest adoption includes:

Land purchase through the Bosquefino Foundation

You can buy the forest adoption in different sizes directly in our forest shop. If you would like to fund an even larger area, please contact us. 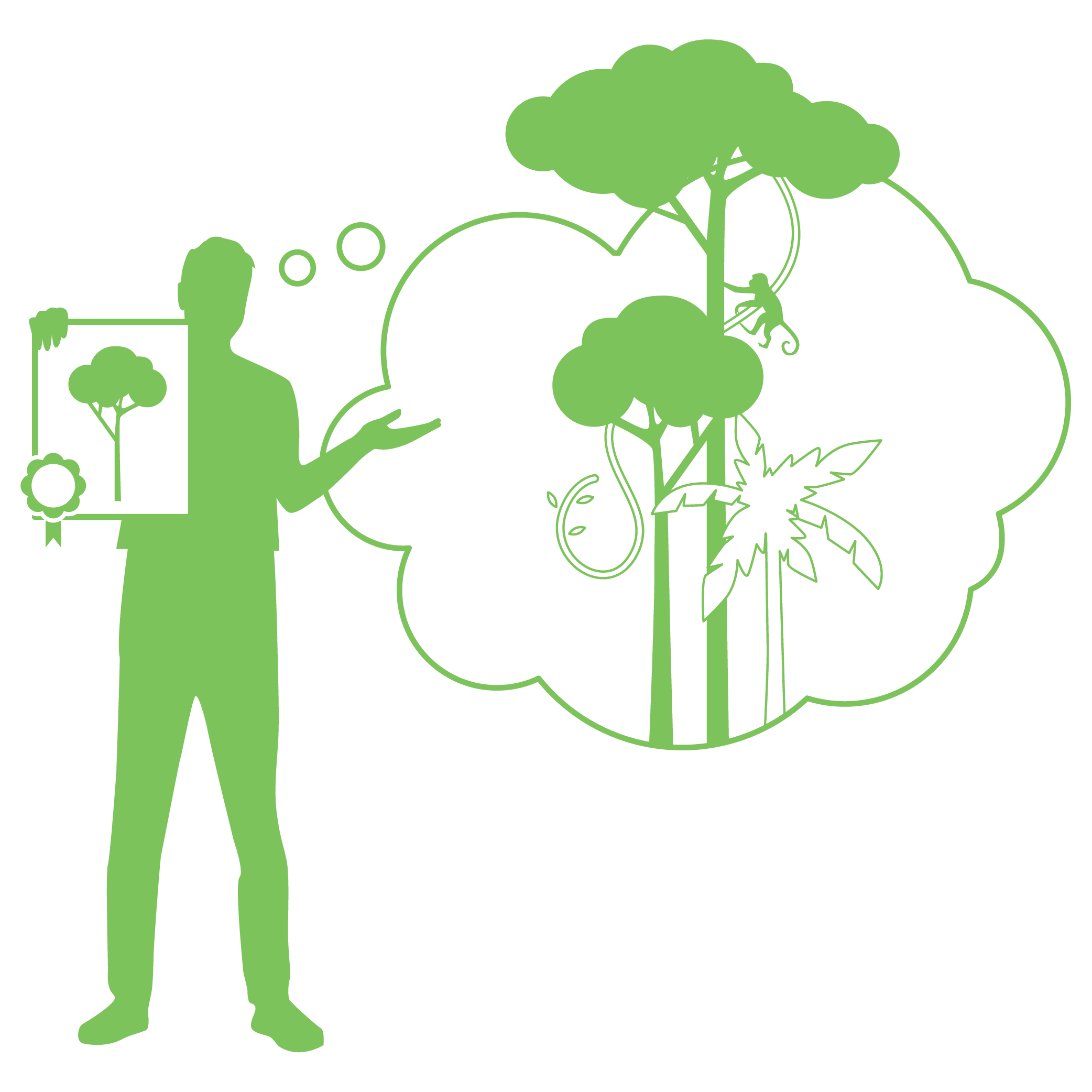 For each forest adoption you will receive:

Personalized certificate with the total area and compensated amount of CO2

Map with the marked forest plot

Forests are among the most important CO2 sinks our planet. Through plant photosynthesis, carbon dioxide (CO2e) is converted into biomass and oxygen is released. A reduction of the CO2 concentration in the atmosphere is the result. Reforestation and forest conservation projects are therefore a central measure to achieve climate goals.

The absorption of CO2 is significantly higher in older forests than in a young forest. It is therefore all the more important that everything possible is first done to protect the forests that still exist from deforestation. In parallel, former forest areas must be reforested.

To calculate the carbon storage capacity of tropical moist forests, Arbofino commissioned an evaluation based on existing studies and empirical data from forestry experts. The calculations were made for a period of 50 years, starting with reforestation using different native tree species. By converting the stored carbon (C) into CO2 equivalents (CO2e), companies as well as private individuals know how much CO2 they are offsetting by funding reforestation and forest conservation projects over a certain period of time.

Through the collaboration with the Technical University of Guayaquil, the carbon storage capacity of our own natural reforestations as well as protected forests is to be measured over the long term, in order to supplement the currently limited studies available with our own empirical values.

Here is a comparison of how many CO2  equivalents (CO2e) are emitted per person for one kilometer by car or plane (average values):

It is not only the climate that is doing badly; biodiversity is also declining at a rapid pace. The latest report of the World Biodiversity Council made it clear once again: the global state of nature is frightening! The Biodiversity Convention wanted to significantly reduce the loss of biodiversity by 2020, but these goals were not be achieved. On the contrary, mass extinction is in full swing. Climate change and intensive land use are the main drivers.

This makes it all the more important that forests are not reforested with the sole aim of absorbing CO2. The simultaneous promotion of biodiversity must be equally central. Only a forest that contributes to local biodiversity is a truly valuable forest. A long-term biodiversity monitoring in cooperation with the Technical University of Guayaquil records the current situation as well as the change over the next decades. The goal is a continuous improvement process of the reforestation projects based on scientific data and the specialized knowledge of experts.

Based on our monitoring of the fincas, among other things with numerous photo traps, we have already been able to capture many exciting moments and animal surprises. 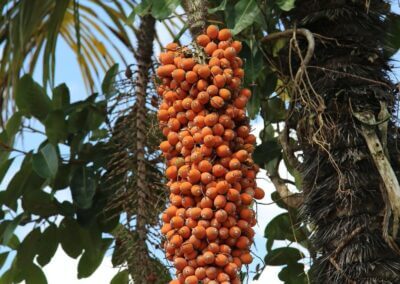 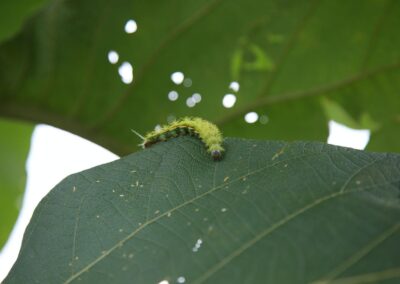 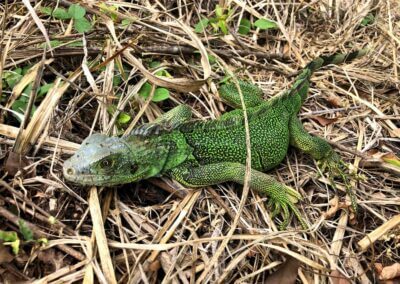 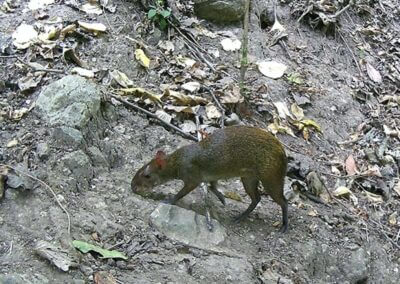 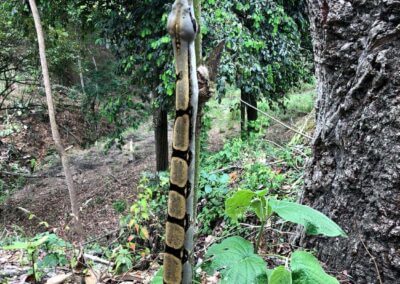 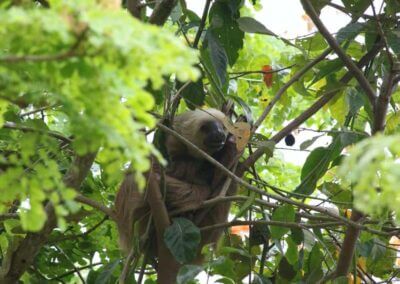 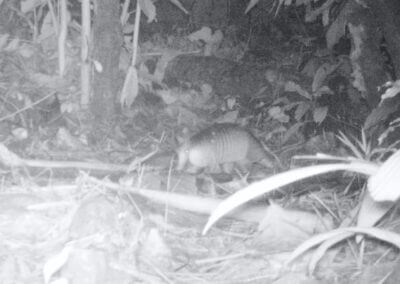 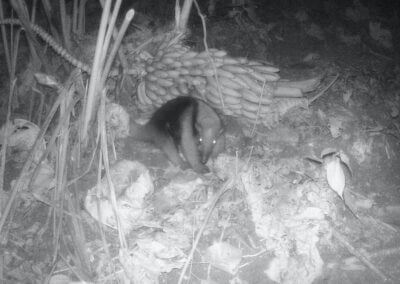 Although Arbofino AG already protects all remaining forests on its own land and reforests former pasture land partly with natural forest, it was important to us that all natural reforestation projects that are part of this reforestation concept take place on neutral land. By establishing the non-profit Bosquefino Foundation, which acquires the properties, the land is secured and thus protected from any commercial interests in the long term. The foundation’s purpose also includes social projects to support the local community and raise awareness of environmental issues.

Arbofino ensures that the projects are implemented professionally and transparently through the foundation. In doing so, we can count on a well-established team in Ecuador. Our close family ties with the country and several years of experience with reforestation projects in Ecuador are an important factor in fulfilling the foundation’s purpose.

Our partners for Reforestation & Forest Conservation

Protecting the climate and promoting biodiversity are more urgent than ever. We are therefore particularly pleased about the valuable support of our partner companies, which are committed to our Reforestation and Forest Conservation projects. The more we are, the more positive impact we can make. Thank you very much!